CEO for Triumphant, Geoff Quares upped the ante, “We stepped from a smaller production to a much bigger production. Our quality of production is trying to meet real TV quality network,” he said.

The bouts were aired on Youtube live with multiple cameras, Stephan Bonnar on the mic as presenter and the experienced David Huey and Brandon Kyle commentating. Bonnar is a former MMA superstar who had a famed career in the UFC while Huey and Kyle have both worked as commentators for Triumphant before. A smashing after party was held at the Inspire club in the heart of downtown Las Vegas with fighters, trainers, fans, and staff in attendance.

The co-main event between Ethan Quiachon and Diego Paez was a great clash of styles over three rounds of full rules Muay Thai action. 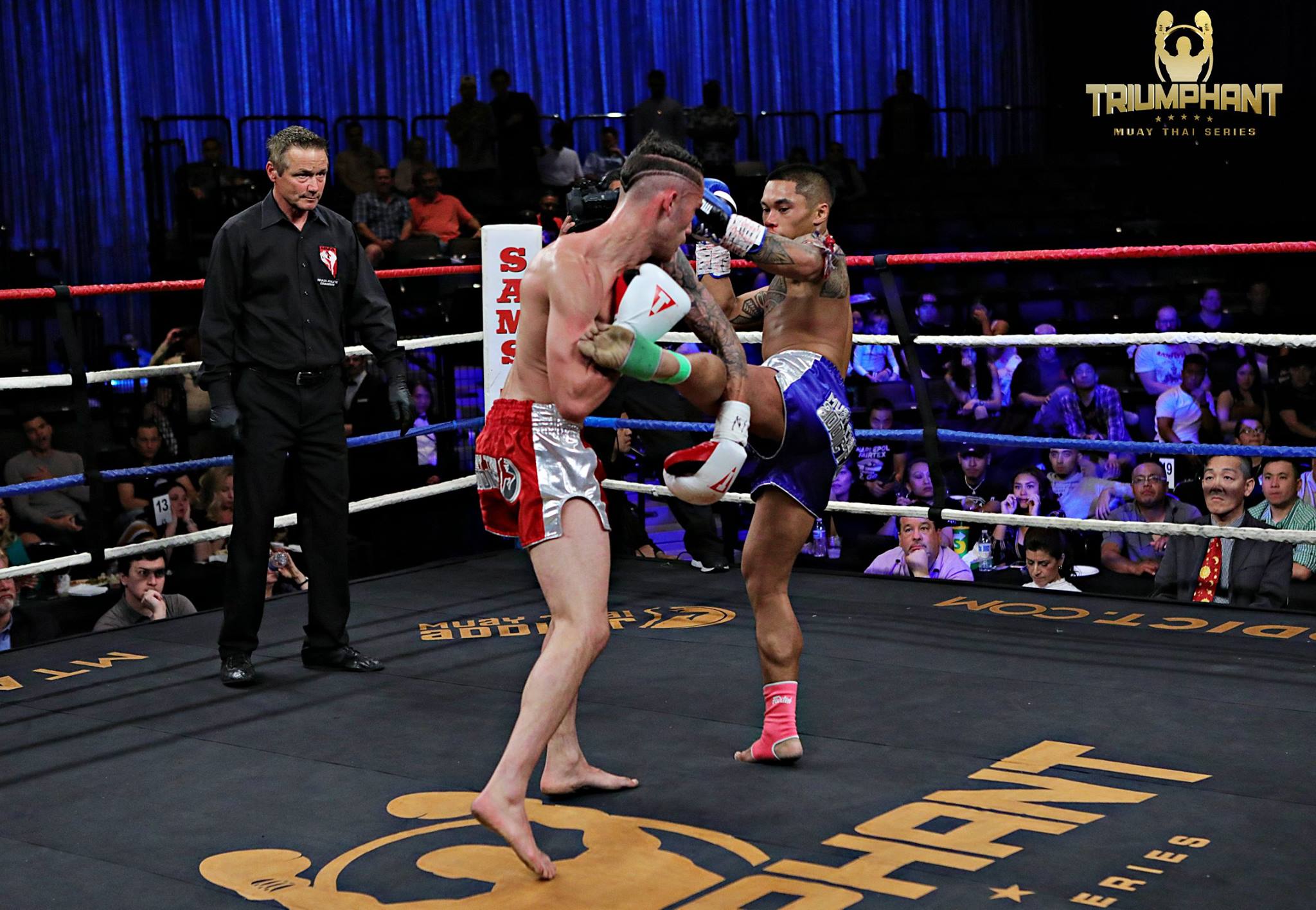 “Ethan came in confident. His record isn’t as desirable as he would like it but if you ask me there’s nothing to wins and losses. It’s about your fight style,” Quares said. “That’s what I look at. This was a classic clash of styles with Paez’s matrix moves versus the traditional Muay Thai of Quanchon.”

Coming off a win at Lumpinee stadium, San Francisco’s Woodenman fighter looked to use his timing and rhythm to beat his opponent. He pumped out a double jab and threw heavy kicks to slow down his opponent.

“I felt good and confident coming off Thailand,” Quiachon said. “Diego was tricky. Once I picked up my momentum, I felt good.”

The first two rounds Paez kept his work rate high but by the third round, he’d visibly slowed. Paez was in the lead enough to take the win though.

“Ethan was a very game opponent and was experienced,” Paez said. “I think it played it the way I envisioned. I used my range and size to my advantage.” 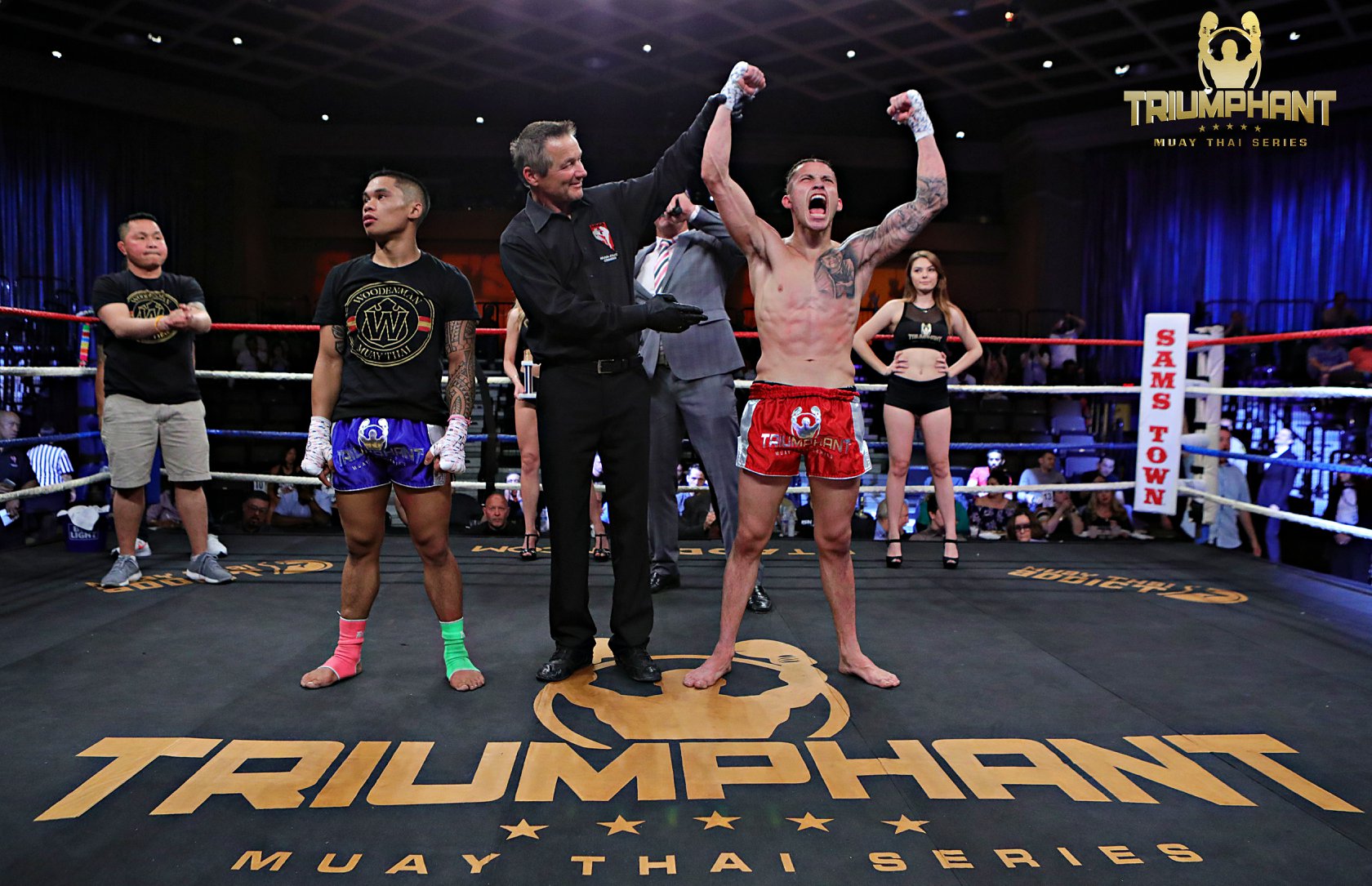 Fighting out of Classic Fight Team in Fountain Valley, Paez took the decision win over Quaichon. There was some talk of a potential rematch but both Quiachon and Paez are thinking of moving weight classes. For Quiachon he wants to go down while Paez thinks he will go up.

The main event, for the Triumphant title, had Nareupol Fairtex defending his belt against the hungry Canadian Scott Mackenzie.

“Mackenzie has a lot of experience especially at IFMAs, he’s being fighting pro caliber,” Quares said of the fight. “A lot of the IFMA guys will clean out the Americans. He’d been on a huge winning streak. He was bigger. Nareupol though, no one can really compare to him. He’s a ghost in the ring. The way he uses ropes, he’s too experienced.” 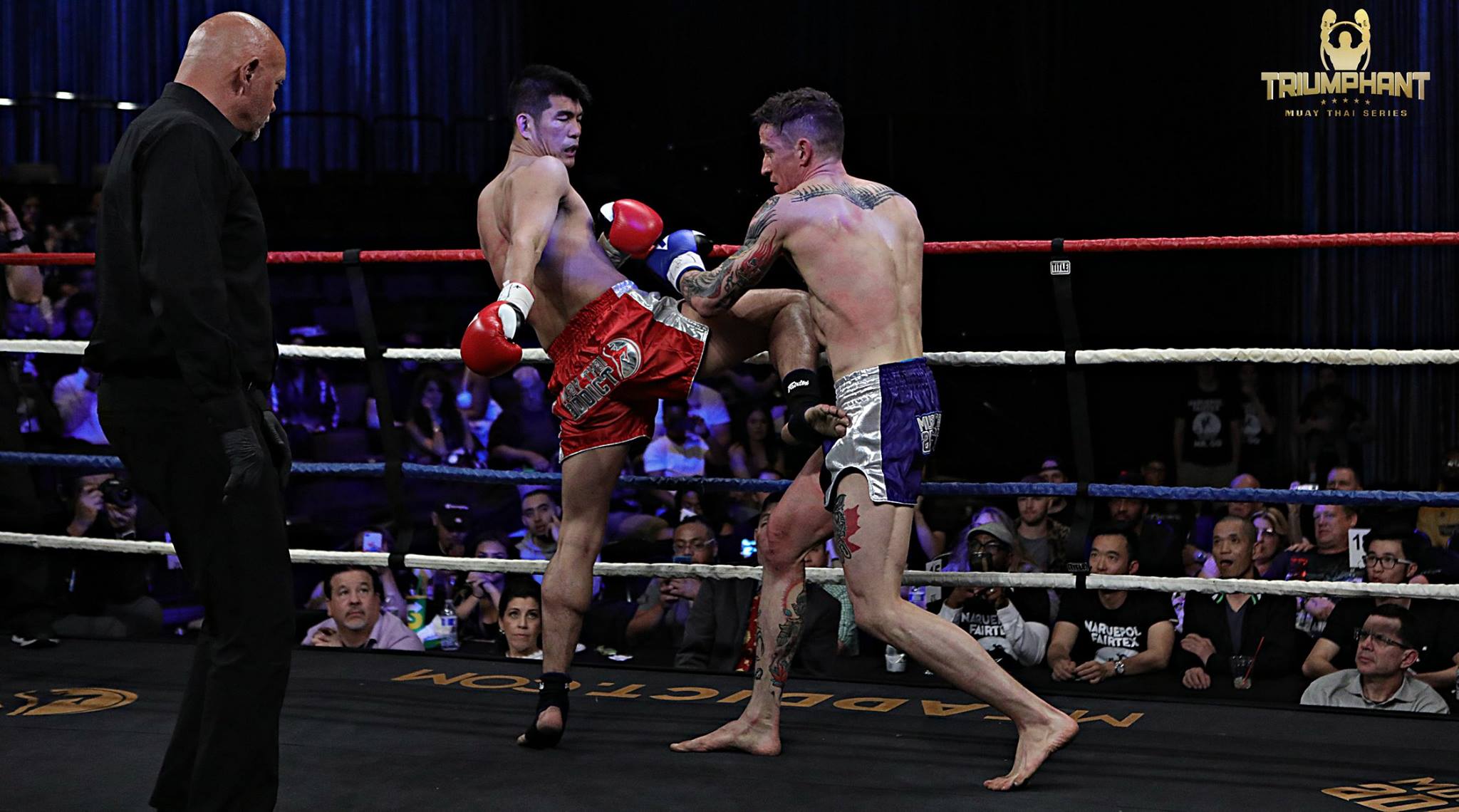 The crafty Thai fighter used his ring IQ and awareness to effectively manage Mackenzie. Naruepol shut out the Canadian’s gameplan and scored some hard hits on Naruepol.

Mackenzie admitted to his position in the game. “His fight IQ was so high. He identified my strengths immediately,” he said. “I couldn’t draw him out of his gameplan. Fighting someone with that experience level you have to be careful. If you miss someone at IFMA a have a second or two. With him he threw back with fast and with heat. There wasn’t that time.”

Attesting to that was a quick high kick from Naruepol sending the Canadian off balance about 30 seconds into the first. Off balance Mackenzie putting his hands to the ground and when he got back up the ref was giving him a count.

Naruepol meanwhile was frustrated with his own performance. “My calf muscle was a little sore, so I had to be more careful than I wanted. I wanted to go for the KO in round 2,” he said. 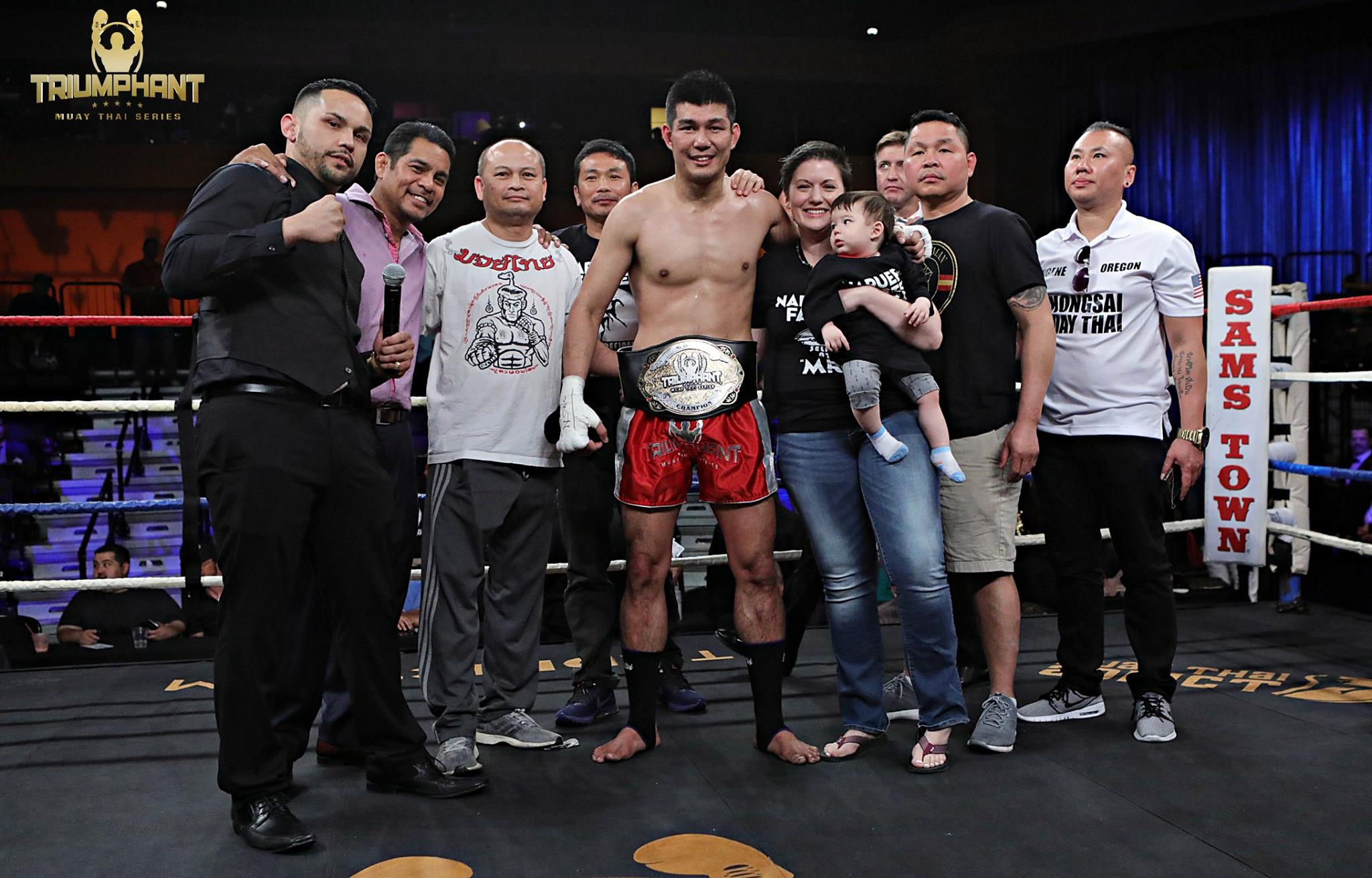 All the boxers were quick to admit to the added excitement of duking it out in the fight capital of the world.

“It was good for American Muay Thai for a show like that in Vegas. It will have more opportunity for fighters and promotions to be there,” Quiachon said.

Naruepol likened it to fighting in his home country. “Fighting in Vegas was fun, it’s hot like Thailand and the food is a lot like Thai food. I am very happy to be training and fighting again,” he said.

“It was super cool fighting in Las Vegas,” Paez stated. “At Triumphant I feel the difference. The platform feels better. I feel like a professional.”

Unfortunately one of the professional fights, between Chaz Mulkey, and Chris Culley fell through. Mulkey showed up on weight and ready to go. His opponent did not. 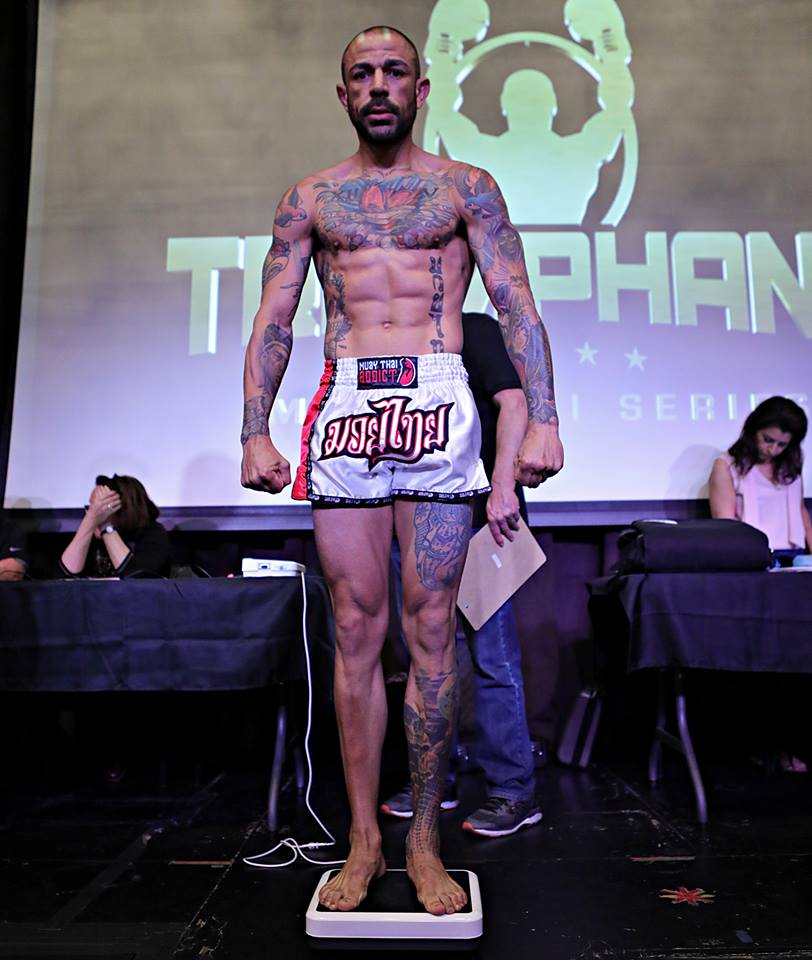 “Culley didn’t make weight nor did he submit his medicals,” Quares said. “He said he had medical problems.”

Mulkey is scheduled for a fight for the next Triumphant show.

Triumphant 8 is having a stacked card on Saturday, June 29th at the CMXX Event Center in Las Vegas. Fight card and ticket announcement will be coming up soon. Don’t miss the next installment in America’s hottest card! 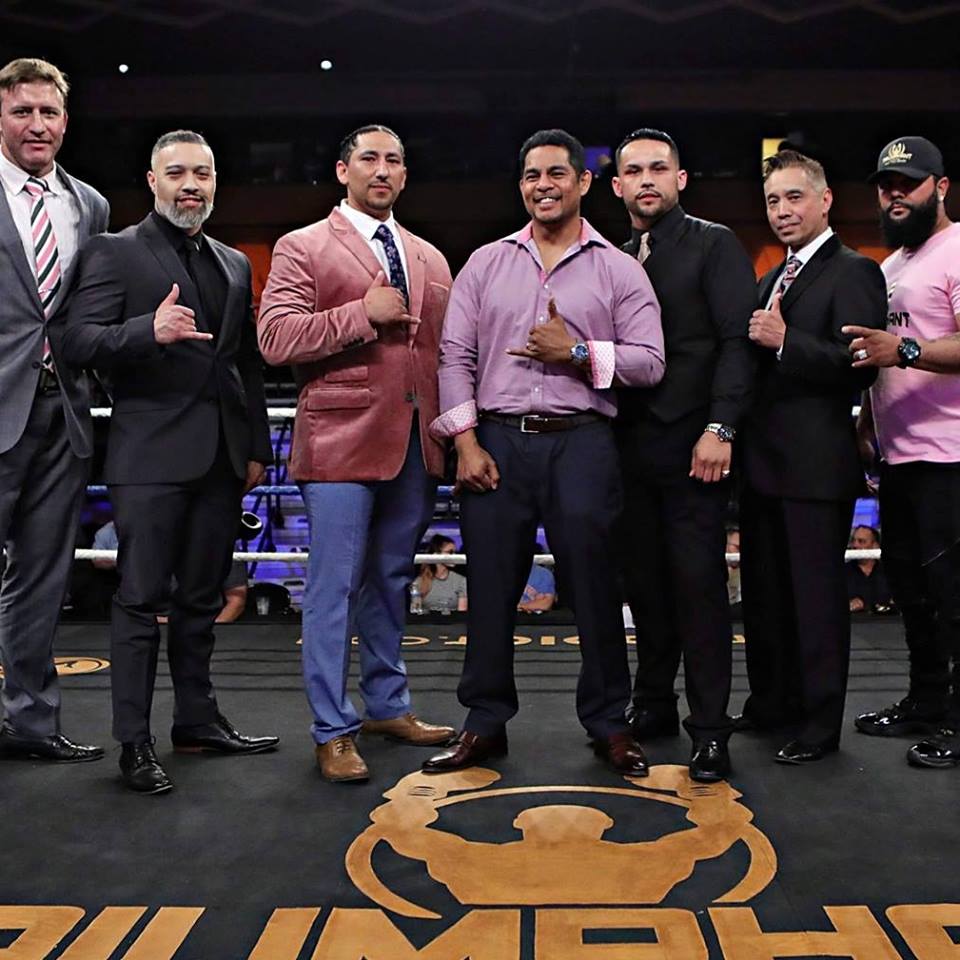 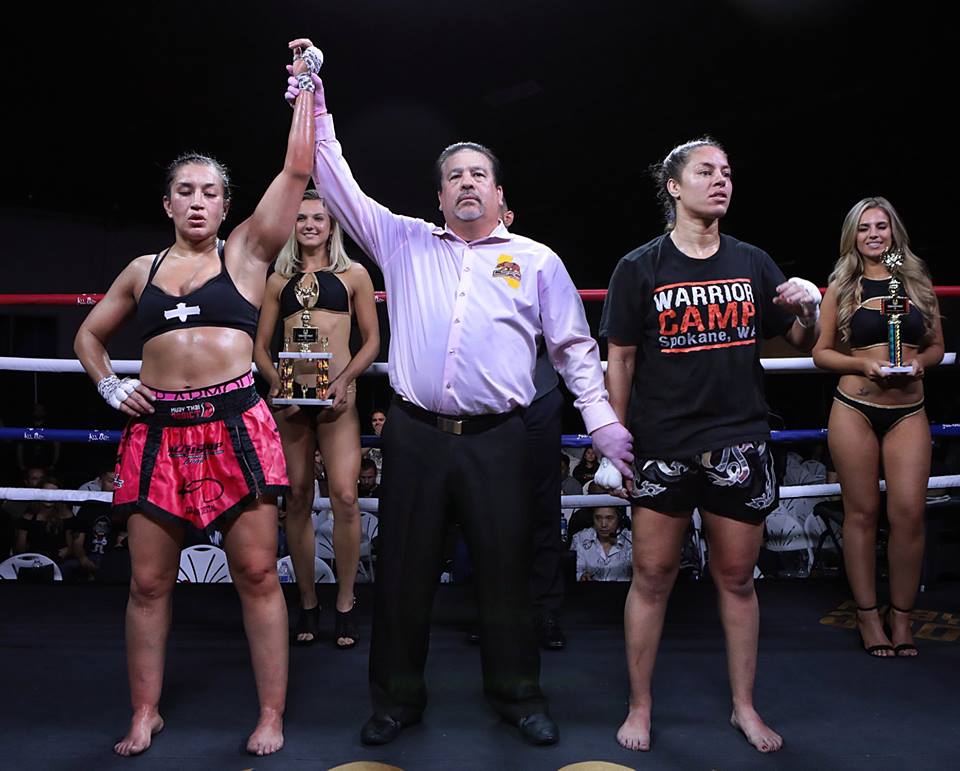 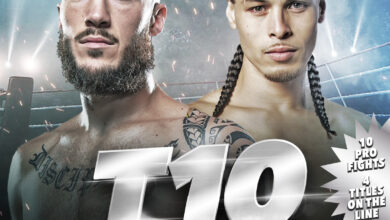 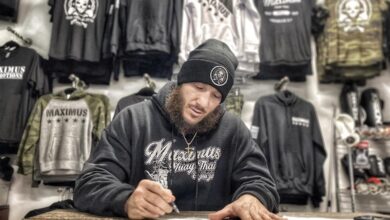